At this time we are working to move these performances to new dates.  We ask patrons to check their email in regards to show specific information that has gone out or continues to go out to keep everyone up to date.

Please hang on to your current tickets as they will be honoured at any new dates scheduled.  If the new date(s) is not one you can attend, then please reach out to the box office for a refund.

Elsa and Anna are princesses in the beautiful kingdom of Arendelle - they have loving parents, and many guiding hands to help them grow. They are two normal girls having fun with each other - except Elsa has a special power. She has magic that commands ice and snow. After an accident that harms her sister, Elsa locks herself away in her room, terrified of the power that she cannot control. Fate hands the girls a terrible blow; their parents are lost at sea. Elsa must sit on the throne of her beloved Arendelle - but she argues with her impetuous sister during her coronation and the gloves come off! Elsa cannot control her magic --it strikes Arendelle and changes the beautiful spring to blistering cold winter. Aghast, Elsa flees.

Your family will enjoy the familiar music and story of Anna, Elsa, Kristoff, Hans, Olaf and Sven along with a cast of colourful characters in this student-acted production by Bottle Tree Productions' 2020 Musical Theatre students.

Bottle Tree Productions is committed to providing quality arts experiences for their students, and role-sharing doubles these aspiring actor's time on stage. Please check the grid below if you are interested in supporting a particular young person - each actor plays at least two different roles, alternating performances. Where a cast member is not named on the grid (for blue or for green), they are appearing in supporting roles. 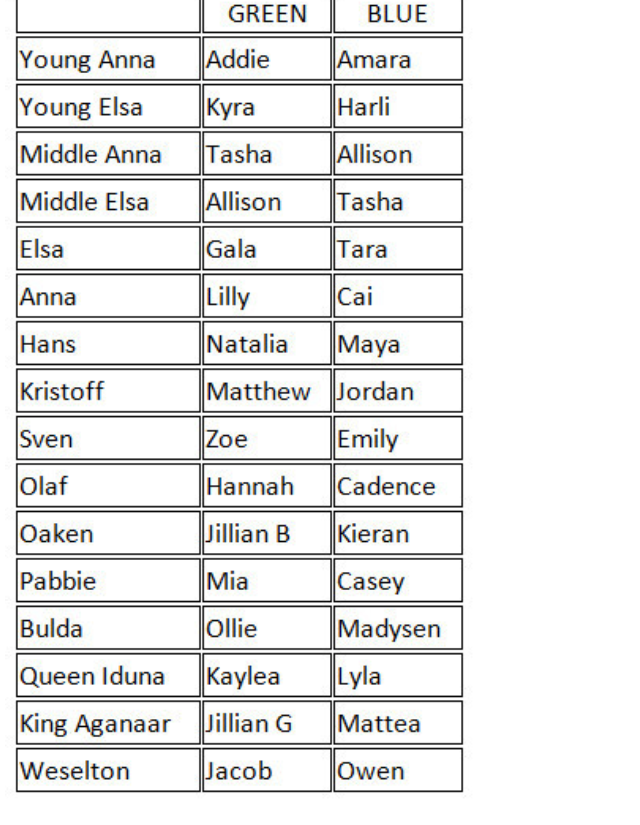 There are no events that match your request.